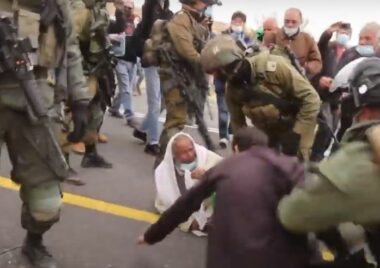 Israeli soldiers attacked, Friday, a nonviolent procession in Tiwana village, in Masafer Yatta area, south of the southern West Bank city of Hebron, causing many Palestinians to suffer the effects of teargas inhalation, in addition to shooting a woman with a teargas bomb, and abducting an elderly man.

Media sources said the soldiers resorted to the excessive use of force against the locals, and international peace activists, who were nonviolently marching in Masafer Yatta.

They added that the soldiers shot one woman with a teargas bomb in her leg and caused dozens to suffer the effects of teargas inhalation, in addition to abducting an elderly man after assaulting him.

The procession was organized by local Palestinian Bedouin communities against a recent serious escalation of attacks and violations carried out by the soldiers and fanatic Israeli colonialist settlers, targeting their lands, communities, and even livestock, amidst constant attempts to illegally confiscate more land to build and expand the colonies.

It is worth mentioning that the soldiers sealed all entrances of the village, earlier Friday, to prevent the Palestinians and international peace activists from holding the nonviolent procession.