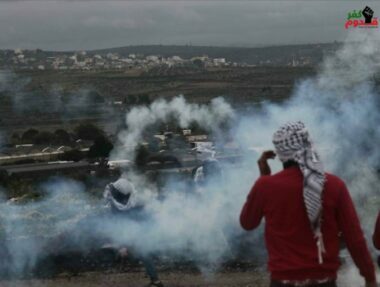 Morad Eshteiwi, the media spokesperson of Fateh movement in Qalqilia, said the soldiers invaded the village before the scheduled weekly procession and started firing gas bombs, concussion grenades and sponge-tipped bullets at the residents.

He added four Palestinians were shot with sponge-tipped bullets, and dozens suffered the effects of teargas inhalation.

The soldiers also detained Ja’far Eshteyya, a cameraman for the French Press Agency (AFP), searched his cameras, and equipment, and released him after threatening to abduct him.

Several youngsters hurled stones at the invading soldiers who fired more gas bombs at random, many striking homes, causing many Palestinians, including children, to suffer the effects of teargas inhalation.

The attack took place when dozens of residents gathered in front of Omar Bin al-Khattab mosque in the town, and chanted against the ongoing Israeli violations, in addition to boosting popular resistance against the occupation, the illegal annexation wall, and the colonies.

Kufur Qaddoum holds weekly processions, every Friday and Saturday, protesting the illegal Israeli Annexation Wall and colonies, in addition to the continued closure of the town’s main road since the year 2003.

The road is no longer accessible to the Palestinians and is exclusively used by illegal Israeli colonists, driving to and from Kedumim illegal colony, built on stolen Palestinian lands.