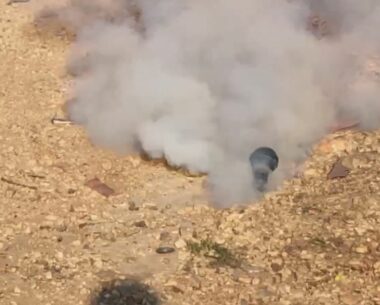 Morad Eshteiwi, the media coordinator of the Popular Committee in Kufur Qaddoum, stated that dozens of soldiers invaded the town just as the Palestinians staring marching from the center of the town.

He added that the soldiers fired a barrage of gas bombs and concussion grenades, causing scores of injuries, mainly due to the effects of teargas inhalation.

On Friday, the soldiers attacked the profession in the town, and injured eighteen Palestinians.

Kufur Qaddoum holds weekly processions, every Friday and Saturday, protesting the illegal Israeli Annexation Wall and colonies, in addition to the continued close to the town’s main road since the year 2003.

The road is no longer accessible to the Palestinians and is exclusively used by the colonists, driving to and from Kedumim illegal colony, which was built on stolen Palestinian lands.