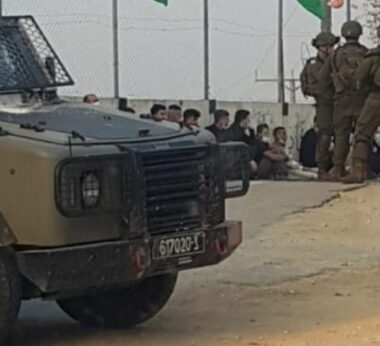 Israeli soldiers abducted, Sunday, twenty Palestinians, from several parts of the occupied West Bank, most of them from Deir Nitham village, north of the central West Bank city of Ramallah, after the army invaded and ransacked dozens of homes. The Palestinians who were taken prisoner from Deir Nitham were abducted after an Israeli settler was injured near the village.

Media sources in Ramallah have reported that many army jeeps invaded the village, before the soldiers initiated extensive and violent searches of homes, and abducted fifteen Palestinians.

They added that the soldiers interrogated dozens of Palestinian teens and young men for several hours while inspecting their ID cards, and attacked many of them with batons.

The Israeli army said a 30-year-old Israeli settler woman suffered serious wounds to her head, after stones were hurled at her car on Route 465, near Deir Nitham, close to the illegal Halamish colony.

The woman was rushed by Israeli Magen Admon medics to the Sheba Hospital, in Tel HaShomer.

It is worth mentioning that Deir Nitham has been subject to constant invasions and violations by the soldiers and the illegal colonists, living in Halamish, and constantly trying to illegally annex Palestinian lands to expand it, in addition to trying to confiscate the village’s only water spring.

In Jenin, in northern West Bank, the soldiers abducted Yazan and his brother Islam Kamel Abu Shamla, from their home in Ya’bad town, west of the city, after storming their home and ransacking it.

In occupied Jerusalem, the soldiers abducted Yasser Darwish, a member of Fateh movement’s regional council, from his home in the al-‘Isawiya town, north of the city.

It is worth mentioning that, last month, the army issued an order restricting the movement of Darwish for six months, after he was interrogated for several hours and was ordered to pay a 3000 Shekels fine, “for his political activities in Jerusalem.” He was also slapped with an order preventing him from leaving Jerusalem for three months.

In Hebron city, in southern West Bank, the soldiers abducted Tareq Anwar Ed’eis, from his home in the al-Hawouz area.

The army also invaded the al-Fawwar refugee camp, south of Hebron, and fired many gas bombs at residents in its alleys and their homes.

In addition, the soldiers installed military roadblocks at the main roads of Tarqoumia and Sa’ir towns, near Hebron, before stopping and searching dozens of cars, and interrogated many Palestinians while inspecting their ID cards.

It is worth mentioning that the soldiers closed Huwwara military roadblock, south of Nablus, in northern West Bank, preventing the Palestinians from crossing, while dozens of colonists gathered nearby, and hurled stones at Palestinian cars, causing damage.