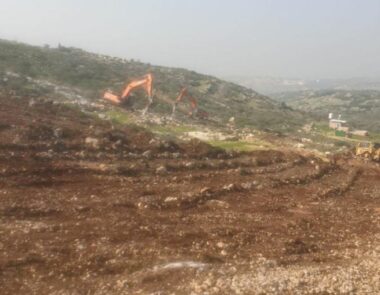 Israeli soldiers bulldozed and uprooted, Sunday, large areas of Palestinian olive orchards in Khallet Hassan village, west of the central West Bank city of Salfit. The attack is linked to a larger colonialist plan that would sever Palestinian geographical contingent.

The lands are owned by the sons of the late Salim al-Khalil, from Biddya town, near Salfit.

The Wall and Colonization Resistance Commission has reported that Israel is trying to install a new outpost by annexing privately-owned Palestinian lands, in preparation to establish a large colony that would cut the geographical contiguity between Salfit and Qalqilia.

This colony would lead to the illegal annexation of thousands of Dunams of Palestinian lands, owned by residents of Biddya, Qarawat Bani Hassan, Sniria, Kafr Thuluth and Deir Istiya.

A few months ago, Palestinian government minister Walid Assaf said in a press conference that the Palestinian Authority managed to foil the illegal annexation of 118 dunams in Khallet Hassan.

He added that, in the 1980’s, Israel began planning the construction a large colony that would link with three other illegal colonies, including the Ariel block, which would eventually result in cutting any geographical contiguity between Qalqilia and Salfit governorates.

Assaf stated that, in the year 2016, Israel officially announced the plans for the new colony. In related news, Israel decided to annex dozens of Dunams of Palestinian lands in Bethlehem to build new segregated colonies and colonialist units.

The illegal annexation targets lands in Basin 8 in the Shefa area and Wadi al-Hindi in the al-Khader town, south of Bethlehem, Basin 1 from Umm at-Tale’ area in Artas village, Basin 4 in Wa’ar Abu Mohor and al-Aqaban, in addition to Basic 5 in the al-Morouj area in the Ta’amra village, east of Bethlehem.