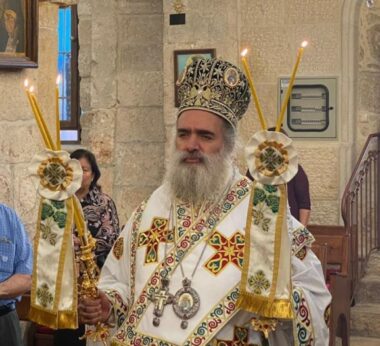 Father Atallah Hanna, the Archbishop of Sebastia from the Greek Orthodox Patriarchate of Jerusalem, issued a statement strongly condemning the Israeli escalation and ongoing invasions into the Al-Aqsa Mosque in occupied Jerusalem.

Father Hanna stated that Israel continues its attempts to turn the ongoing conflict, its illegal occupation of Palestine, into a religious war, by escalating the violations against the holy sites in occupied Palestine, especially Al-Aqsa Mosque.

“As Christians, we cannot accept any form of violation against the holy sites, and we continue to condemn these attacks and ongoing provocative invasions by fanatic Israeli colonialist settlers, accompanied by the army and the police, in and around al-Aqsa,” he stated, “These violations should not be accepted by anybody, and must not only be condemned, but also stopped.”

“It seems that the occupation authority is seeking to transform the conflict, the ongoing illegal occupation, into a religious war,” Archbishop Hanna added, “The policy of nurturing a culture of racism and fanaticism is very serious and should not be accepted by anybody.”

Father Hanna also stated that the case of Jerusalem is not a religious one, however, religion is used for political purposes, and added that any person around the world who claims to fight for justice, equality, and human rights, should not accept these violations.

“We hope that Arab countries, all international legal and human rights groups, and world countries, would act and stop these violations,” he said, “They cannot just stand idly by while the colonists continue to hold these provocative marches in Al-Aqsa and the Old City of Jerusalem while hurling insults and provoking the Palestinians.”