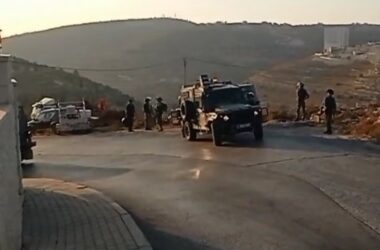 A large group of illegal Israeli colonizers accompanied by soldiers, invaded on Sunday evening, the at-Tira neighborhood in the central West Bank city of Ramallah.

Eyewitnesses said the colonists and the soldiers invaded the neighborhood from the area in Ein Qinya town, northwest of Ramallah.

They added that the colonists invaded the area in a bus, accompanied by many army jeeps, and headed towards an area to perform prayers after the soldiers closed many roads and prevented the Palestinians from crossing.

The entire area remained off-limits to the Palestinians until the soldiers accompanied the colonists out later.

In related news, a group of colonialist settlers attacked and injured, a Palestinian man, 62, in front of his home, in addition to assaulting several young men, in the Tal Romedia neighborhood in Hebron city, in the southern part of the occupied West Bank.