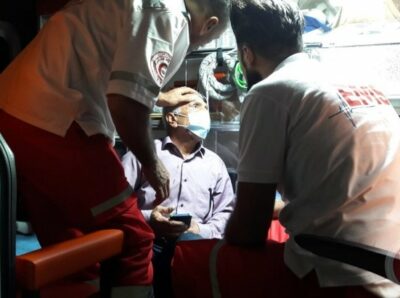 Israeli colonialist settlers attacked and injured, Sunday, a Palestinian man, 62, in front of his home, in addition to assaulting several young men, in Tal Romedia neighborhood in Hebron city, in the southern part of the occupied West Bank.

Medical sources said the colonists assaulted Shaher Abu Aisha, 62, causing several cuts and lacerations, while he was standing in front of his home.

They added that local medics provided the needed treatment to Abu Aisha, before moving him to the Hebron governmental hospital, suffering mild injuries.

Several young men were also injured in the attack, while Israeli soldiers just stood and watched.

Resident Bassam Abu Aisha said the colonists invaded Be’er as-Sabe’ Street in Tal Romedia, and attacked the Palestinians while shouting slurs at them.

The colonists came from the illegal Ramat Yishai outpost, which was installed on Palestinian property, and constantly attack the locals to force them to leave.