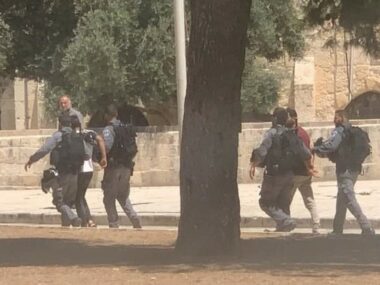 Deifallah al-Fayez, the spokesperson of the Jordanian Foreign Ministry, strongly denounced the Israeli violations and escalation in the Al-Al-Aqsa Mosque, in occupied Jerusalem.

Al-Fayez stated that these violations against the holy site are seriously escalating, and constitute direct breaches of International Law, and requested Israel to respect the sanctity of Al-Aqsa and the status quo.

He added that Israel is obligated by International Law and all related agreements to respect the civilian population and the holy sites, and called on Tel Aviv, as the occupying power, to respect the sanctity of Al-Aqsa Mosque, and to end its ongoing provocations and violations.

Al-Fayez also said that by allowing hundreds of Israeli colonialist settlers, accompanied by the soldiers and the police into the holy site, Israel is committing serious violations targeting the holy site, and the hundreds of Muslim worshipers in the holy compound, who were assaulted, forced away and detained.

The statement came after more than 2100 illegal Israeli colonialist settlers, accompanied by dozens of soldiers, invaded the Al-Aqsa Mosque, on Sunday morning.

The soldiers assaulted dozens of worshippers, before surrounding the al-Qibli mosque in the Al-Aqsa compound and cut its wires to prevent the calls for prayer.

Eyewitnesses said the soldiers surrounded the al-Qibli mosque while dozens of worshippers were in it, and sealed its gate with iron chains, before assaulting dozens of Palestinians in Al-Aqsa, and abducted many others.