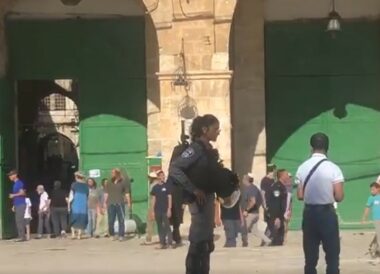 After more than 2100 illegal Israeli colonialist settlers, accompanied by dozens of soldiers, invaded the Al-Aqsa Mosque, in the occupied capital Jerusalem, on Sunday morning, the soldiers assaulted dozens of worshippers, before surrounding the al-Qibli mosque in the Al-Aqsa compound, and cut its wires to prevent the calls for prayer.

Eyewitnesses said the soldiers surrounded the al-Qibli mosque while dozens of worshippers were in it, and sealed its gate with iron chains, in addition to cutting the wires of the speakers of the holy site.

They added that the soldiers also assaulted dozens of Palestinians in Al-Aqsa, and abducted many others after the army and the police accompanied more than 2100 colonialist settlers into the site. It added that the soldiers and the police started assaulting the Palestinian worshipers in the holy site, and forced many of them away, in addition to abducting many others.

The soldiers also fired gas bombs and concussion grenades at the worshipers and chased many of them away.

The Jerusalem Affair Department at the Palestine Liberation Organization (PLO), called on all Arab and Islamic nations to aid the Palestinians, and perform their duties in protecting the holy sites and in supporting the Palestinian people who are struggling for their survival on their land, and the establishment of their independent state. It added that, while the soldiers and the police facilitate the invasions into the holy site’s compound, they continue to assault the Palestinians, and prevent them praying in the holy site.

The Department stated that these violations, including the ethnic cleansing of the indigenous Palestinians in Jerusalem, especially in Sheikh Jarrah, are constantly escalating amidst the silence of the International Community.

In addition, the Wadi Hilweh Information Center in Silwan (Silwanic) has reported that the soldiers also assaulted the Palestinians, mainly women, and children, sitting and walking near Bab as-Asbat, and ordered them to leave.

Silwanic added that the soldiers also attacked a journalist, identified as Liwa’ Abu Rmeila, while she and her team were reporting from Bab Huta gate area, near al-Aqsa.