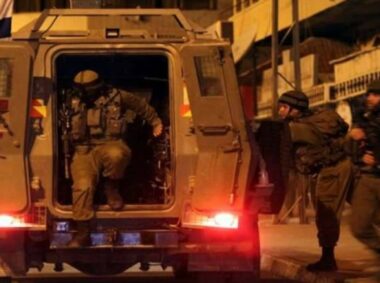 The Jenin office of the Palestinian Prisoners Society (PPS), in northern West Bank, said the soldiers installed a military roadblock at the entrance of Zabbouba village, west of Jenin, before stopping and searching dozens of cars, and interrogated scores of Palestinians while inspecting their ID cards.

It added that the soldier assaulted a young man at the roadblock, identified as Emad Hasan Abu Zeitoun, before abducting him, and moved him to the Salem military base.

The soldiers also invaded Burqin village, southwest of Jenin, before storming and ransacking homes, and abducted two siblings, identified as Sa’id Ali Qablawi and his brother Kasser, both in their twenties.

It is worth mentioning that the siblings also have a brother, Khaled, who was abducted by the army in the year 2018 and was sentenced to six and a half years in prison.