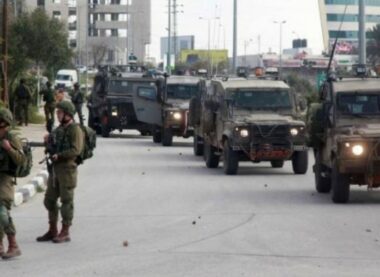 Israeli soldiers invaded, on Monday at dawn, several areas in the central West Bank city of Ramallah, and nearby villages and towns, before invading and searching homes, and abducted six Palestinians, in addition to attacking protesters with rubber-coated steel bullets, gas bombs, and concussion grenades.

Several army jeeps invaded the center of Ramallah city, at-Tihta, and the al-Irsal areas, leading to protests, and fired a barrage of gas bombs, concussion grenades, and rubber-coated steel bullets.

The soldiers also broke into a print shop in Ramallah, before loading its machines and contents into a truck and drove away.

Furthermore, the soldiers invaded Beit Liqya town, southwest of Ramallah, before breaking into homes and searching them, and abducted Najeeb Mafarja, a former political prisoner who was just released a few days ago.

During the invasions into homes, the soldiers assaulted several young Palestinian men and interrogated the families.

Local sources said the soldiers also flew a surveillance drone over several parts of the village.