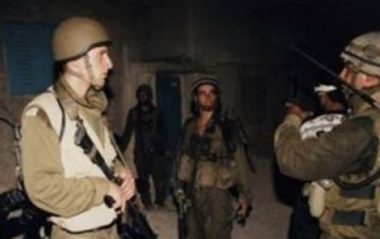 The Bethlehem office of the Palestinian Prisoners Society (PPS), in the occupied West Bank, has reported that Israeli soldiers invaded, earlier Wednesday, the Deheishe refugee camp, south of the city, and Husan town, west of Bethlehem, and abducted three Palestinian teenagers, including a child, 15 years of age.

The PPS stated that the soldiers surrounded the Deheishe refugee camp, before invading it, violently searched homes and abducted Mohammad Monjed Lahham, 18.

It added that the soldiers also invaded and ransacked homes in Husan village, west of Bethlehem, and abducted Mohammad Za’ouli, 17, and Bashar Sabateen, 15,

In Hebron, in the southern part of the West Bank, the soldiers invaded Doura town, south of the city, and abducted a young man, identified as Hazem Khaled Khallaf, 24.

The soldiers also installed many roadblocks at Hebron’s southern entrance, in al-Fahs area, in addition to Beit Einoun area, east of the city, Farsh al-Hawa, west of Hebron, and Wad al-Ghrous, in its eastern part, before stopping and searching dozens of cars, and interrogated many Palestinians while inspecting their ID cards.

Dozens of soldiers and military vehicles were also deployed on roads leading to many villages and towns, especially on bypass roads, in several parts of the Hebron district.

Furthermore, the soldiers abducted overnight and at dawn Wednesday, four Palestinians, from their homes, in various parts of the Old City of occupied East Jerusalem.

In related news, the soldiers abducted, Ahmad ‘Attoun, a Palestinian legislator who is originally from Jerusalem, and a Hamas spokesperson in the West Bank, Fayez Abu Warda, after storming their homes, in al-Biereh town, in the Ramallah and al-Biereh governorate, in central West Bank.

Abu Warda was frequently detained and imprisoned by Israel, and spent at least ten years in several detention and interrogation centers.