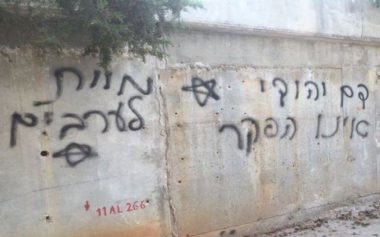 Extremist Israeli colonists wrote, earlier Wednesday, racist graffiti, including the largely-used “Death To Arabs,” on a wall of a Palestinian neighborhood, in occupied East Jerusalem.

The racist graffiti was written in the Baq’a Palestinian neighborhood, and were uncovered by locals who called the Police.

Besides “Death To Arabs,” among the racist graffiti was “Arabs Go Home,” “Revenge,” Kahane Was Right,” and “We Will Not Be Silent.”

Groups of fanatic Israeli colonists have been responsible for thousands of assaults, including burning homes, cars and other property, in addition to setting mosques and churches ablaze, defacing graveyards and buildings, and burning Palestinian lands.

One of the most extreme crimes was the terrorist attack that targeted a home, belonging to Dawabsha family, in Douma village, in the northern West Bank district of Nablus, in which Reham Dawabsha, 27, her husband, Sa’ad Dawabsha, 32, and their infant, Ali Dawabsha, 18 months, were burnt to death, and the only survivor, Ahmad Dawabsha, 5, suffered second-degree burns to 60% of his body.