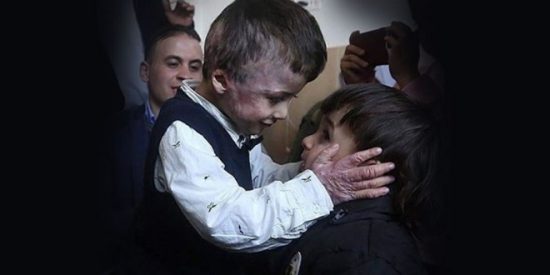 Nearly one year to the date that his mother, father, and 18-month-old brother were murdered, as Jewish extremists firebombed their family home, six-year-old Ahmad Dawabsha was released from Israel’s Sheba Medical Center, Tel Hashomer, on Friday, according to Israeli media.

The young boy was severely injured in the high-profile attack that took place in the Nablus district town of Douma, in July of 2015, and has undergone a series of complicated surgeries since.

Furthermore, according to the PNN, Naser Dawabsha, the child’s uncle, revealed that the administration of the hospital, where child Ahmad has been receiving health care since his injury one year ago, announced the end of the first phase of his treatment after he had absolutely overcome the risk stages.

Dawabsha was released to the care of Hussein Dawabsha, his maternal grandfather, with whom he will live in Douma, according to Haaretz.

Ma’an News Agency additionally reports that the boy will have to return to the hospital for weekly checkups, and is expected to undergo additional surgeries over the coming months, most of them plastic surgeries to help reconstruct parts of his body and face that were severely burned.

Two Israeli suspects were indicted for murder, for the incident, in January, five months after suspects belonging to a Jewish terror organization set the home of the Dawabsha family ablaze, killing 18-month-old Ali Saad immediately.

The infant’s parents, Riham and Saad, later died from severe burns, leaving then four-year-old Ahmad Dawabsha the only surviving member of the family.

Attacks by settlers are often carried out under the armed protection of Israeli forces who rarely make efforts to protect Palestinians from such attacks.

Over 500,000 Israelis live in Jewish-only settlements across occupied East Jerusalem and the West Bank in violation of international law, with recent announcements of settlement expansion provoking condemnation from the international community.

According to the United Nations Office for the Coordination of Humanitarian Affairs (OCHA), there were a total of 221 reported settler attacks against Palestinians and their properties in the West Bank and occupied East Jerusalem, in 2015.