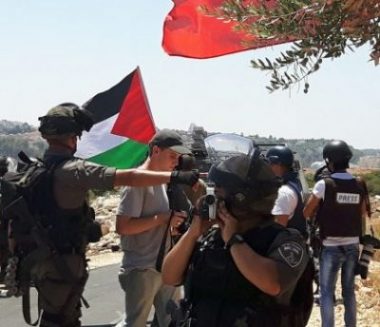 Dozens of soldiers attacked, Friday, the weekly nonviolent protest in Bil’in village, in the central West Bank district of Ramallah, kidnapped four Palestinians, including a Journalist, and briefly detained a local photojournalist.

The soldiers used excessive force against the protesters and kidnapped four Palestinians, identified as journalist Khaled Sabarna who works for an Iranian news agency, in addition to the head of the Local Council in Bil’in Khaled Mansour, Journalist Emad Burnat (the director of Five Broker Camera Documentary about Bil’in), and local activist Ashraf Abu Rahma.

The soldiers also detained photojournalist Haitham Khatib, after confiscating his cameras, and released him later.

Many Israeli and international peace activists participated in the weekly protest, and marched from the center of the village while carrying Palestinian flags and chanting for liberation and independence.

The coordinator of the Popular Committee against the Wall and Colonies in Bil’in, Abdullah Abu Rahma, said the Israeli military assaults and violations will never be able to stop the nonviolent protests.

“We reject this illegal occupation, and its colonies – our protests will continue,” Abdullah said, “Every part of occupied Palestine is subject to daily assaults and violations by the soldiers and the armed colonist settlers. This occupation must end.” It is worth mentioning that, last Friday, Ashraf Abu Rahma (who was kidnapped today) told the IMEMC that the soldiers were continuously filming him, and that he believes they intend to abduct him later.