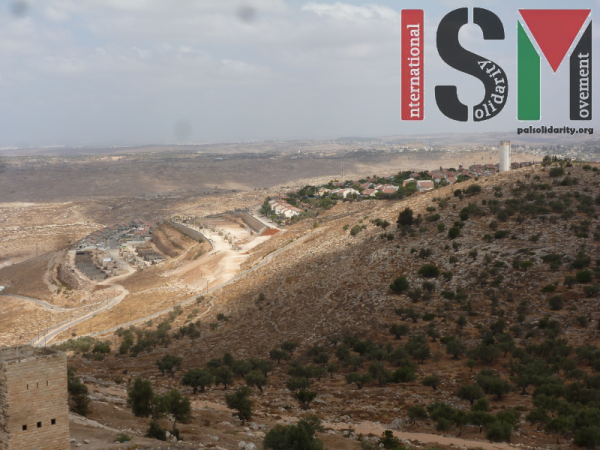 On the morning of July 14th, Israeli excavators arrived on Majid Mahmoud’s farmland in Deir Qaddis to begin work on an illegal expansion of a wastewater facility for the nearby illegal settlement of Nili.

Construction vehicles and Occupation forces were met by about fifty Palestinians from Deir Qaddis and nearby Nil’in, in protest of the theft and destruction of village land, who refused to leave until the construction was halted.

Through nonviolent means the villagers managed to temporarily prevent the destruction of their grazing lands, though excavation and land clearing did resume in the days afterwards. Illegal settlements around Deir Qaddis have been expanding for decades, swallowing up thousands of dunams and dispossessing farmers and agricultural workers in the area.
Majid’s land, now on the other side of a settler road, has been rendered mostly inaccessible by both the expansion of illegal settlements and the threat of violence from Israeli forces and private settlement security.
“We have no rights under this Occupation. I cannot ask the soldiers why they are on my land. It is as if I am being beaten, but cannot question it or raise my hands to stop it,” Majid said. “We have all the papers to prove ownership, but it does not matter.”
Majid and members of the local council are planning to bring the case to court and have all the documentation necessary to do so. They are not optimistic, however, about their chances.

“It will not stop,” said Fares, “and the next generation will wonder why it is this way.”
Deir Qaddis is surrounded on three sides by the Apartheid Wall and the illegal Israeli settlements of Nili, Modi’in Illit, and Na’aleh, cutting it off from much of the West Bank. According to Fares, only 4,000 of the village’s original 10,000 dunams have not yet been seized by Israeli forces and settlers. Over ninety percent of the Deir Qaddis is classified as “Area C,” territory in which Israel maintains full military and civil control.
In 1999, Israeli authorities assured the people of Deir Qaddis that all land lying west of the town would remain untouched. Israel has since broken that promise, with both state confiscation and private theft of valuable farmland within Deir Qaddis.

According to international law, all Israeli settlements are illegal, as is nearly every piece of the Israeli colonial apparatus. Israel will continue to build, and the people of Deir Qaddis will continue to resist the ongoing theft of their land and livelihoods.