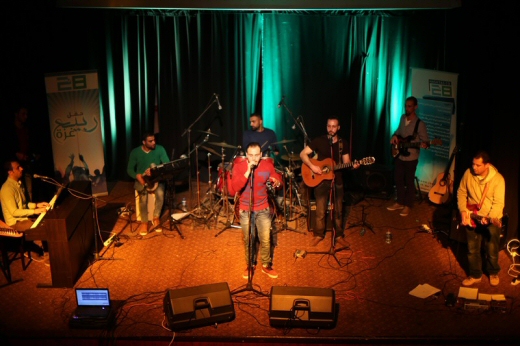 It’s taken a long time and demanded patience and perseverance. But slowly, and in spite of all the obstacles, Gaza’s Watar Band is gaining international recognition.

The soft rock pop group recently completed a tour of France, organized by the French Institute of Jerusalem, a branch of France’s official international cultural center, marking their second such trip in a four-year period that also saw them win a prestigious arts award and record their first album.

“Our friendship and ambition helped us face all difficulties,” said Khamis Abushaban, 26, the band’s bassist.

Abushaban is one of four friends who founded the now seven-strong band in 2008. That year also witnessed the devastation of the 2008-2009 Israeli attack that left more than 1,400 people dead in Gaza.

The horror left an indelible mark.

“We performed in the rubble of the Palestine Red Crescent Society building, which was destroyed during the assault. The building had been home to the only music school in Gaza.”

The concert was hugely symbolic for the band, and repeated Israeli aggressions have all left their mark on its members.

During Israel’s 51 days of bombing in the summer of 2014, the band recorded and released the track “We Teach Life, Sir.”

“In one of the short ceasefires, we gathered in the house of a friend who had a home studio and recorded our song. The lyrics are written by Rafeef Ziadah [a Palestinian spoken word artist and activist], and inspired us to compose the music around it.”