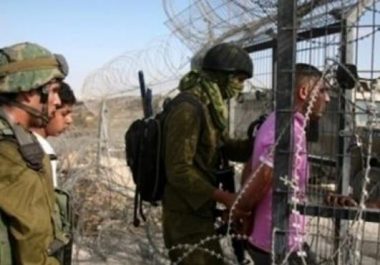 The soldiers also detained four other Palestinians, after invading and searching their homes, but released them a few hours later.

In Ramallah, in central West Bank, the soldiers abducted three siblings, identified as Jaber, Majd and Hammad Awad al-Hajj, in addition to Ghassan Mousa Azzam, after searching their homes.

The soldiers also abducted a Palestinian woman, from Al-Reshiq family, the wife of Odai Sonnokrot who was only released from prison just a week ago.

Furthermore, the soldiers abducted Mustafa Taleb al-Badan, 20, from his home in Teqoua’ town, east of Bethlehem.

In related news, the soldiers abducted Ibrahim Airbases, from occupied Jerusalem, just minutes following his release from the Negev Detention Camp, after her served a prison term of 50 months, and moved him to the al-Maskobiyya interrogation center, in Jerusalem.