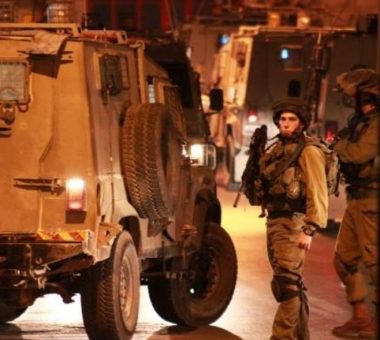 Israeli soldiers abducted, on Thursday at dawn, a Palestinian man and his child, in Jayyous town, northeast of Qalqilia, in addition to abducting a former political prisoner from Broqin town, southwest of Jenin, two men in Nablus, in the northern part of the West Bank, and four in the central West Bank governorate of Ramallah. The army also abducted fourteen Palestinians and injured eleven in Abu Dis, near Jerusalem.

Eyewitnesses said dozens of soldiers invaded Jayyous town, northeast of Qalqilia in northern West Bank, before many soldiers broke into, and ransacked, the home of Hazza’ Qaddoumi, and abducted him along with his son, Mustafa, 14 years of age.

The soldiers also invaded and violently searched homes in the town, and interrogated many several Palestinians while inspecting their ID cards.

The army fired many live rounds, rubber-coated steel bullets and gas bombs, during clashes that took place following the invasion.