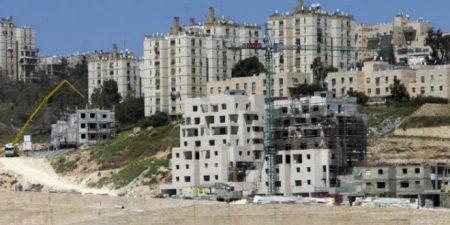 The Jerusalem Planning and Building committee is to approve, on Sunday, the construction of 176 settlement units in the Jabal Al-Mukaber area, East Jerusalem, according to Israeli media.

There are talks about expanding Neveh Zion Settlement outpost, which was established six years ago, in the middle of the area’s Palestinian neighborhood, which currently has 91 settlement units.

The largest settlement outpost in Jerusalem which is “Ma’ale Hazeitim,” where 200 settler families live, PNN reports.

The application for starting the settlement construction at Jabel Mukaber was submitted by an Israeli company which is owned by several foreign companies registered in Australia, the Cayman Islands and the United States.

According to Peace Now Israeli rights movement, Jewish-Australian businessman Kevin Bremeister is behind this company, and Israeli businessman Rami Levy holds 15 percent of the company’s shares.

The movement added that the previous outline of the project in (Neve Tzion) proved the faulty of the allegation which said that the deal is only a real estate deal.

“The Israelis are not interested in buying homes in the heart of the Palestinian neighborhoods. The only ones who do this are those motivated by ideology. There is no economic or real estate issue, but only a political attempt to prevent solving the problem in Jerusalem”.

According to Haaretz, contractor Rahim Levy had purchased the land in the 1970s. Degel company, which originated the project, faced financial difficulties because it failed to market the project, as it is very close to the Palestinian neighborhood. During the sale of the project, Palestinian businessman Bashir al-Masri tried to buy the land, but right-wing parties managed to buy it with the help of Bermeister, who is very active in helping right-wing Israeli organizations in East Jerusalem.

The construction plan at Naveh Zion is to be approved while Israeli Prime Minister Benjamin Netanyahu is on his way to a 10-day political visit to Latin America, then to New York to participate in the UN General Assembly, where he is also expected to meet on with US President Donald Trump to discuss the US plan for reviving the “peace initiative”.

Thus, since Netanyahu will be outside the country,  the meeting of the Supreme Committee of the Civil Administration was postponed, which was supposed to approve the financing building thousands of new settlement units in West Bank. At the request of Netanyahu’s office, the committee will hold its meeting at the end of September or early October only, after the return of the president of the PLO.

Netanyahu’s office also postponed and canceled many building plans, fearing criticism from the United States and other countries.