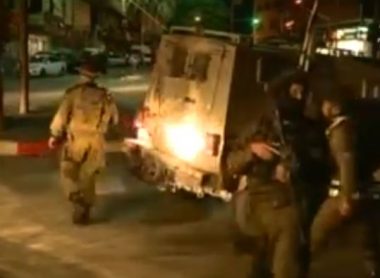 Many soldiers invaded Bab Hotta neighborhood, in the Old City, and abducted a young man, identified as Amin Dweik, who was preparing for his wedding, planned for this coming Friday.

The soldiers also abducted Nasser Johar, from his work in al-’Eezariyya town, southeast of Jerusalem.

In addition, the soldiers abducted Ali Zaghal, from his home in Silwan town, south of Al-Aqsa Mosque, in addition to Abed Najeeb and Yousef Taha, from al-Wad Street area, in the Old City.

Late on Wednesday at night, undercover soldiers infiltrated into Abu Dis town, and abducted Rami ad-Deek, Ra’ad al-’A’raj and Dia’ Ibrahim, all in their twenties.

On Wednesday evening, the soldiers invaded Abu Dis, and clashed with many Palestinians who hurled stones at them, while the army fired rubber-coated steel bullets and gas bombs.

The Palestinian Red Crescent Society (PPS) said its medics provided treatment to ten Palestinians who suffered the severe effects of teargas inhalation, and one who suffered various cuts and burns.