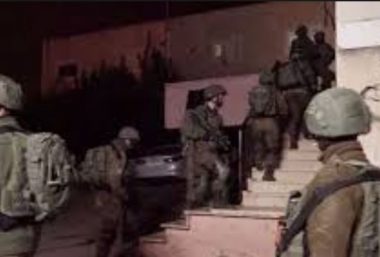 Israeli soldiers abducted, from Saturday evening until Sunday at dawn, 28 Palestinians, from their homes in several parts of the occupied West Bank, including occupied East Jerusalem.

The Israeli army issued a press release stating that its soldiers “arrested 28 wanted Palestinians,” and moved them to several detention and interrogation centers.

In Bethlehem, the soldiers abducted Sufian Amer Ta’amra, 21, from his home in Beit Ta’mar area, east of Bethlehem, after invading his family’s home and violently searching it.

In Hebron, in the southern part of the West Bank, the soldiers invaded many homes in the al-Fawwar refugee camp, south of the city, and searched them before abducting Rida Monir Miqbil, 17.

Furthermore, the soldiers closed the northern entrance of Azzoun town, east of the northern West Bank city of Qalqilia, and assaulted many Palestinians.

The soldiers closed the iron gate which was installed at the entrance of the town and preventing the Palestinians from entering or leaving it.

They also invaded many homes and searched them, while interrogating the Palestinians and investigating their ID cards, in addition to confiscating surveillance recordings and equipment.

In occupied Jerusalem, the soldiers invaded and ransacked many homes in the al-‘Isawiya town, and abducted Amir Khaldoun Mustafa, Ahmad Amer Mahmoud and Mohammad Ayman ‘Obeid.

The Wadi Hilweh Information Center in Silwan (Silwanic) said the three teenagers were cuffed and blindfolded, before the soldiers moved them to the al-Maskobiyya detention and interrogation center, in West Jerusalem.

On its part, the Detainees Center for Studies has reported that the soldiers have abducted 550 Palestinians, including 105 children and twenty women, in March.