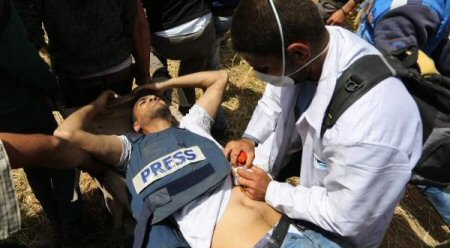 The Palestinian Center for Development and Media Freedoms (MADA) has called for a formation of an independent commission of inquiry to investigate the killing of Yaser Murtaja, a 31 year-old photojournalist for Ain Media and the disproportionate use of excessive force by Israeli forces against journalists and civilians during the peaceful return demonstration along Gaza borders since “Land Day” 03/30/18.

A colleague of Martyr Yasser Murtaja, Hussam Hashem Salem, a journalist for Ain Media, reported to MADA that, after demonstrators set fire to the tires on Friday 04/06/18, Yasser Murtaja was covering the scene from behind the demonstrators, and was standing about 350 meters away from the border fence  where Israeli soldiers were deployed. He was wearing the standard protective vest and helmet. At this point, soldiers began firing live ammunition. One of the demonstrators was injured at the beginning, and then Yasser was targeted soon after, by one of the Israeli snipers, with an explosive bullet to the abdomen from the left side; the bullet penetrated his abdomen and left from the right side.

He also added that Murtaja was transferred to Nasser hospital in Khan Younis, where he underwent a four-hour surgery in which part of his liver was removed. The bullet caused a severe rupture in his spleen and cut off some of the arteries, resulting in extreme blood loss; doctors had to provide him with 16 units. He was then transported to intensive care and, at midnight, his health deteriorated, forcing doctors to begin another surgery. Murtaja passed away after about an hour.

On the same day, at least 6 journalists were injured: Khalil Abu Athra; who was targeted in Rafah, Adham Al hajjar, Izz Abu Shanab, Saber Nour Al Dein, Ibrahim Al Za’noun, and a female journalist named Islam Al Za’noun. All are photojournalists and were targeted in the eastern borders of the Gaza Strip.

With the killing of Yasser Murtaja, MADA has documented a total number of 42 journalists killed by Israeli forces since the beginning of 2000, in the West Bank and Gaza Strip.

Since the start of the peaceful return demonstrations in the Gaza Strip, ten days ago, at least 11 journalists were shot by Israeli soldiers, all of whom were targeted while covering from hundreds of meters away from the border fence where Israeli forces were located. All journalists were perfectly identifiable with their press vests.