Army Abducts 8 Palestinians In Ramallah And Bethlehem, Summons 6 For Interrogation In Hebron 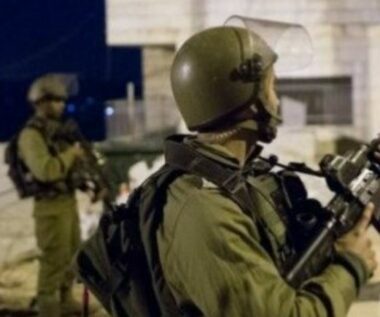 Israeli soldiers abducted, on Monday at dawn, eight Palestinians from the West Bank governorates of Ramallah and Bethlehem, and summoned six others for interrogation, in Hebron, in southern West Bank.

Furthermore, the soldiers invaded the Deheishe refugee camp, south of Bethlehem, south of occupied Jerusalem in the West bank, searched many homes, before abducting Mohannad Fahmi Qawwar, 25, and his brother Rami, 19.

The soldiers also installed many roadblocks in several parts of Hebron city, and the main entrances of Sa’ir and Halhoul towns, north of Hebron, in addition to the ath-Thaheriyya, Yatta, and as-Sammoa’ towns, south of Hebron, before stopping and searching dozens of vehicles, and interrogated scores of Palestinians while inspecting their ID cards.

On Sunday evening, the soldiers shot two young Palestinian men, and caused many to suffer the effects of teargas inhalation, in addition to detaining and assaulting at least 25 others, in Deir Abu Mashal village, north of Ramallah.