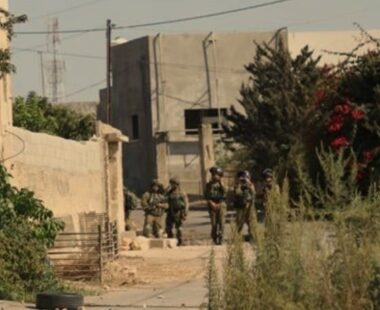 Israeli soldiers shot, on Sunday evening, two young Palestinian men, and caused many to suffer the effects of teargas inhalation, in addition to detaining and assaulting at least 25 others, in Deir Abu Mashal village, north of the central West Bank city of Ramallah.

Local sources said several army jeeps invaded the village, reportedly after some youngsters hurled stones at a car of an illegal colonial settler, driving on the nearby segregated bypass road.

The sources added that the invasion led to protests before many youngsters hurled stones at the army jeeps, while the soldiers fired live rounds, rubber-coated steel bullets, and gas bombs.

One Palestinian was shot with a live round in the leg, and another was shot with a rubber-coated steel bullet, in addition to many who suffered the effects of teargas inhalation.

Medics provided the needed treatment to all wounded Palestinians, before moving the young man, who was shot with a live round, to a nearby hospital.

It is worth mentioning that the soldiers imposed a strict siege on the village, preventing the Palestinians from entering or leaving it, in addition to assaulting twenty-five residents, after detaining them for more than two hours at the entrance of the town, before releasing them.