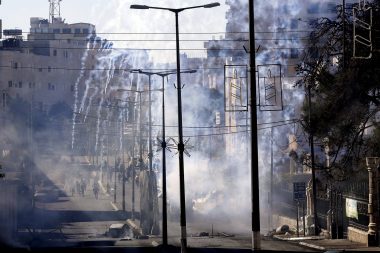 Israeli soldiers abducted, Thursday, one child, and shot eleven Palestinians with rubber-coated steel bullets, in addition to causing dozens to suffer the severe effects of teargas inhalation, in the Al-Mughayyir village, east of Ramallah.

Media sources said a large military force invaded the village, and attacked Palestinian protesters, before firing dozens of rubber-coated steel bullets and gas bombs at them, and at many surrounding homes.

Medics in the village said the soldiers shot eleven Palestinians with rubber-coated steel bullets, and caused dozens to suffer the severe effects of teargas inhalation.

Furthermore, the soldiers abducted a child, only eleven years of age, just as he was exiting his school, on his way back home.

In related news, the soldiers invaded Tal village, southwest of the northern West Bank city of Nablus, and assaulted a child, identified as Islam Ayman Hamad, 15, before abducting him.