Army Abducts A Palestinian From Bethlehem 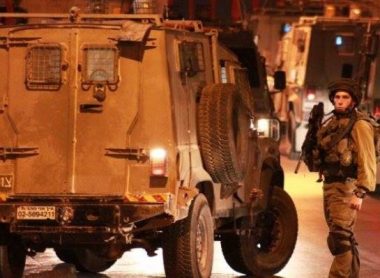 Israeli soldiers abducted, on Wednesday at dawn, a Palestinian man from al-‘Obeydiyya town, east of Bethlehem, and summoned another Palestinian from Hindaza area, in the eastern part of Bethlehem city.

The soldiers also invaded Hindaza area, east of Bethlehem, and summoned Mohammad Khaled Nawawra, for interrogation at the Etzion military base and security center, south of Bethlehem.

Furthermore, the soldiers invaded Jabal al-Khleifat and Wadi Shahin areas, in Bethlehem city, and fired many gas bombs and concussion grenades during clashes that took place with  local youngsters, who hurled stones on the military vehicles.

In addition, the soldiers abducted a Palestinian man, identified as Samir al-Harbawi, the father of Baha’ Harbawi, 23, who was killed on Tuesday evening at a military roadblock, northeast of occupied East Jerusalem.