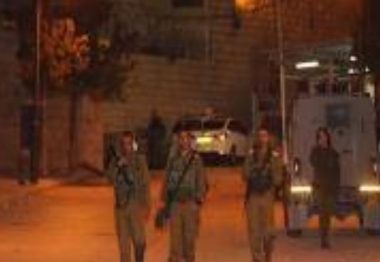 Israeli soldiers invaded, on Wednesday at dawn, the West Bank governorates of Hebron and Salfit, searched many homes and abducted four Palestinians.

Media activist and the spokesperson of the Popular Committee against the Israeli Annexation Wall and Colonies in Beit Ummar, Mohammad Ayyad Awad, said the soldiers have abducted fourteen Palestinians, including five children, in the town, since the beginning of this month.

It is worth mentioning that clashes took place in the area behind the Old Mosque in the town, in addition to Safa Junction area, after the soldiers invaded them.

Furthermore the soldiers abducted a Palestinian man, Ayyoub Abu al-‘Asa, 33, from al-‘Obeydiyya town, east of Bethlehem, and summoned another Palestinian from Hindaza area, in the eastern part of Bethlehem city.

The soldiers also abducted a Palestinian man, identified as Samir al-Harbawi, the father of Baha’ Harbawi, 23, who was killed on Tuesday evening at a military roadblock, northeast of occupied East Jerusalem.