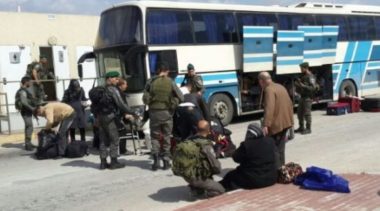 Israeli soldiers abducted, on Sunday at night, a young Palestinian man, from the northern West Bank governorate of Tulkarem, while heading by home from Jordan.

Media sources said Mustafa Jamal Msameh, from Shweika area, north of Tulkarem, was detained directly after crossing to the Israeli-controlled side of the terminal, and was interrogated for several hours.

The soldiers then informed him that they are placing him under arrest, and moved him to a security center, without providing any further information.

The incident is one of the dozens of similar encounters, mainly targeting young Palestinian men traveling abroad through the border crossing, or returning home.

It is worth mentioning that Israel solely controls all border terminals, including commercial crossings, in the occupied West Bank.