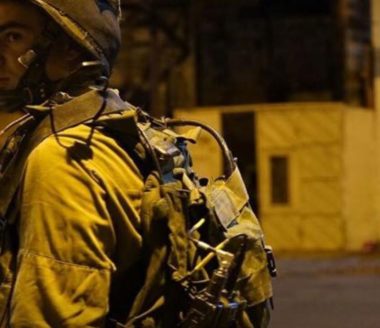 Israeli soldiers abducted, on Sunday at dawn, a young Palestinian man from Hebron governorate, in the southern part of the occupied West Bank, during extensive invasions and violent searches of homes.

They added that the soldiers also invaded the home of Mahmoud Mohammad Abu Turki in Hadeb al-Fawwar village, southwest of Hebron, and illegally confiscated 3000 Shekels from a piggybank.

The soldiers left only 230 Shekels in the piggybank after confiscating the 3000 Shekels and claimed that the remaining amount is “the maximum amount of cash allowed at home.”

The soldiers also invaded the home of a former political prisoner, identified as Qadri Jamil Dweik, from Sinjer area in Doura town, south of Hebron, and violently searched it, in addition to ransacking the home of Emad Mohammad Ismael, in Beit Ula town, west of Hebron.