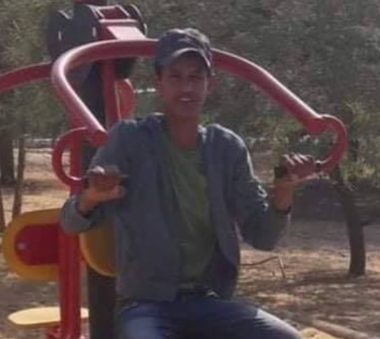 Israeli soldiers killed, on Sunday at dawn, a young Palestinian man, driving through a military block on Road #90 in the Jordan Valley area, near Jericho in the occupied West Bank.

Media sources said army informed the Palestinian District Coordination Office that the young man, Salama Salah Ka’abna, 22, was shot dead while bypassing a vehicle which was stopped by the soldiers, who were inspecting it.

According to Israeli sources, the soldiers were in the process of inspecting a Palestinian vehicle at the roadblock, but another speeding vehicle “drove behind it and rushed towards soldiers who ordered him the driver to stop.”

The army claims that the Palestinian driver did not heed to the soldiers’ orders to stop, before they opened fire at him a car, seriously wounding him, but he died from his wounds shortly afterwards.

In addition, the army said two other Palestinians were in the car, but managed to escape, and added that an inspection of the car showed that it was stolen.

The slain Palestinian was from Fasayel area in the Al-Auja village near Jericho.