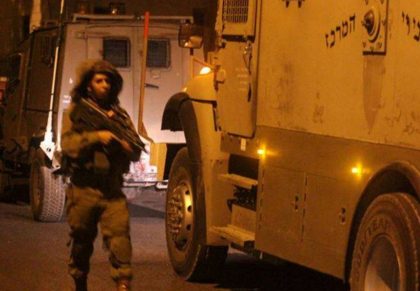 The Hebron office of the Palestinian Prisoners’ Society (PPS), in the southern part of the occupied West Bank, has reported that Israeli soldiers have abducted, Wednesday at dawn, one Palestinian in the district, and installed two roadblocks.

It stated that the soldiers searched many homes in Bani Neim town, east of Hebron, and abducted one Palestinian, identified as Ahmad Ghazi Hmeidat.

The PPS added that the soldiers interrogated many Palestinians, in their homes, while inspecting their ID cards.

The soldiers also installed two roadblocks at the main roads leading to Ethna town, west of Hebron, and the ath-Thaheriyya town, south of Hebron, before stopping and searching dozens of cars, and interrogated many Palestinians while inspecting their ID cards.

In addition, the Bethlehem office of the Palestinian Prisoners’ Society (PPS) has reported that Israeli soldiers, and undercover forces, have abducted four Palestinians in several areas of the district.