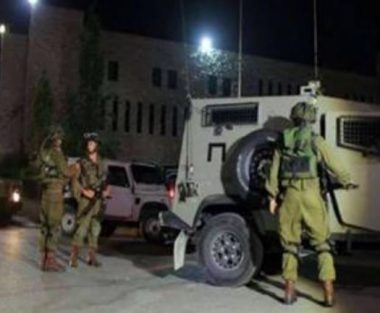 The head of the Student Senate in Birzeit University Ahmad al-‘Ayesh, said the soldiers invaded many buildings in the university, starting approximately at 3:30 at dawn, and smashed many doors, especially the main administration office, a computer lab, the science college, and Kamal Nasser Hall.

Al-‘Ayesh added that the violent search caused excessive damage, and that the soldiers also illegally confiscated computers, flags, various files and students’ belongings, especially members of the Islamic Bloc and the leftist Popular Front for the Liberation of Palestine (PFLP).

Al-‘Ayesh stated that this was the third invasion by the soldiers into the university campus in the last three years, and called for immediate intervention by legal and human rights groups around the world, to stop the escalating Israeli violations against students, staff and their educational facilities.

The University strongly denounced the illegal invasion, searches and confiscation of property by the soldiers, and added that it is currently trying to estimate the total damage and losses.

Also at dawn, the Hebron office of the Palestinian Prisoners’ Society (PPS), in the southern part of the occupied West Bank, has reported that Israeli soldiers have abducted one Palestinian in the district, and installed two roadblocks.

The Bethlehem office of the Palestinian Prisoners’ Society (PPS) has reported that Israeli soldiers, and undercover forces, have abducted four Palestinians in several areas of the district.