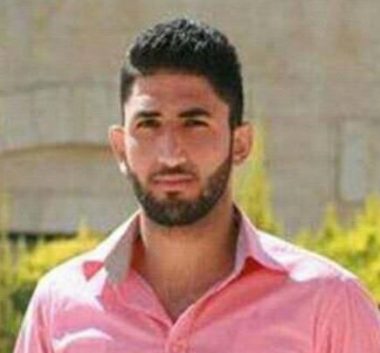 Israeli soldiers shot and killed a young Palestinian man on Wednesday on al-Wad Street, in occupied Jerusalem, after alleging that the young man stabbed a soldier. Bullet fragments from the Israeli soldiers’ gunfire also injured a Palestinian child in the skull. Israeli sources said two officers were wounded.

Israeli military sources claimed that the young man, later identified as Hammad Khader Sheikh, 21, stabbed two officers with a screw driver, at the Lion’s Gate, before the soldiers shot him dead. Sheikh is from Beit Surik town, northwest of Jerusalem.

The sources added that Hammad, from the southern West Bank city of Hebron, was first moved to Hadassah Israeli Medical Center, in Jerusalem, and later succumbed to his serious wounds.

Eyewitnesses said the soldiers fired many live rounds at Sheikh, and left him bleeding onto the ground for nearly twenty minutes.

A Palestinian doctor, who was in the area, tried to help Sheikh, but the soldiers forced him away, and later allowed the doctor to approach him just before an Israeli ambulance arrived at the scene and moved him to the hospital.

Several hours before his death, Hammad wrote a post on his Facebook page stating “My wish for you all, is that if I don’t return, I will see you in heaven.”

Directly after the incident, the soldiers closed all roads leading to al-Wad Street, in Bab al-‘Amoud Street, and the Gate of the Tribes (Bab al-Asbat), and prevented Palestinians from  entering or leaving the Old City.

In Sultan Suleiman Street, the army fired live rounds into the air to force the Palestinians away, and detained three children. The random army fire also mildly wounded a Palestinian child, identified as Fahmi Eyad Jweiles, 13, with bullet fragments in the head, as he and his brother, Nour were leaving their school in the Old City.

Nour suffered an anxiety attack and was also brought to the hospital when he saw his brother shot before his eyes.

The child’s father said his son will be undergoing surgery, Thursday, at the Hadassah Israeli medical center, as he suffered skull and nose fractures, and is currently in a moderate-but-stable condition.