Army Abducts A Woman, Invade Many Homes, Near Jerusalem 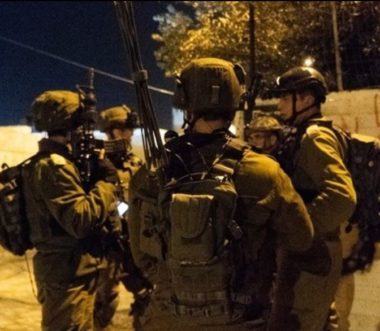 Local sources in Beit Duqqu said the soldiers abducted Zakiyya Ali Hussein, 30, when she headed to an interrogation center after she was ordered to go there.

They added that the soldiers also stormed and ransacked more than twelve homes in Beit Duqqu, and assaulted many Palestinians.

The home invasions, the violent searches and the abducted of the Palestinian woman led to protest across the village, and the soldiers fired live rounds, gas bombs, and rubber-coated steel bullets.

It is worth mentioning that the invasion is part of a series of violations targeting Palestinian villages, northwest of Jerusalem, especially after the soldiers installed roadblocks on roads leading to Biddu, Beit Iksa, and al-Judeira villages.

On Friday at dawn, the soldiers shot a Palestinian medic and abducted thirteen other Palestinians, including a university student, in several parts of the occupied West Bank.