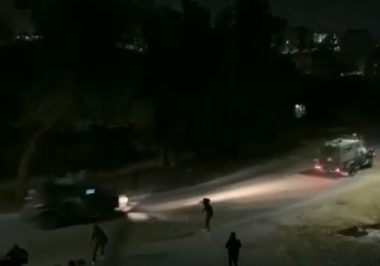 Israeli soldiers shot, on Thursday at dawn, a medic and abducted thirteen other Palestinians, including a university student, in several parts of the occupied West Bank.

In Ramallah, in central West Bank, the soldiers invaded Ein Misbah neighborhood and Surda Junction, and resorted to the excessive use of force against Palestinian protesters, by firing live rounds, rubber-coated steel bullets, and gas bombs at them.

Medical sources said the soldiers shot one medic with a rubber-coated steel bullet in the leg and caused dozens of Palestinians to suffer the effects of teargas inhalation.

The soldiers also abducted a young woman, who is a student at Birzeit University, identified as Shatha Majed Hasan, from her home in Ein Misbah neighborhood.

In addition, the soldiers abducted Malek al-Lowzi, 25, from his home in Betunia town, west of Ramallah.

Protests also took place in Beit Rima town, northwest of Ramallah, when the soldiers invaded it before storming and ransacking many homes.

In Doura town, south of Hebron, the soldiers invaded and ransacked the home of Mohammad Abu ‘Arqoub.

During the invasion into Doura, the soldiers fired many gas bombs and concussion grenades at Palestinian protesters.

In Jericho, the soldiers invaded and ransacked the home of Mohammad Khalil Ibrahim, 32, before abducting him.

In Jenin, in northern West Bank, the soldiers abducted Lina Faisal Bazzour, while crossing Jeet military roadblock, on her way back home in Raba village, southeast of Jenin.