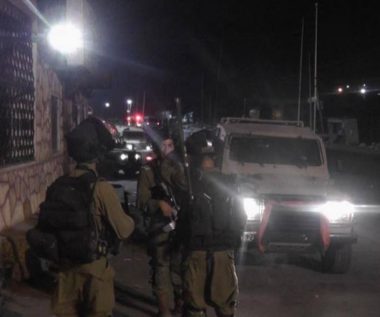 Israeli soldiers abducted, overnight until dawn hours, Tuesday, eleven Palestinians, including a woman, in many parts of occupied East Jerusalem, and took them to several detention and interrogation centers in the city.

The soldiers also fired gas bombs, concussion grenades and rubber-coated  steel bullets, at the local youngsters who hurled stones at them following the invasion.

Many hours after the invasion, the soldiers broke into the homes of the three abducted Palestinians, and violently searched them.

In addition, the soldiers invaded homes in the at-Tour neighborhood, overlooking the Old City, and abducted a woman, identified as Manal Abu Sneina, in addition to Rashid Resheq.

The Palestinian Prisoner’s Society (PPS) has reported that many soldiers invaded al-‘Isawiya town, in the  center of Jerusalem, and abducted Mahmoud Mousa Odeh, in addition to Husam Manasra, from Qalandia, Majed Khashan, from Shu’fat refugee camp, and Hussein Kahalaf, from Hizma town, northeast  of Jerusalem, after breaking into their homes and searching them.