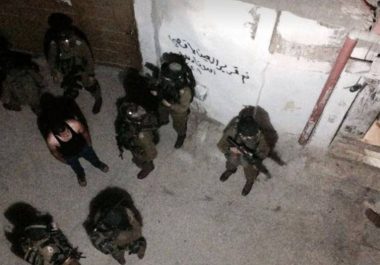 Dozens of soldiers invaded, Tuesday, many Palestinian homes in Ethna and Beit Ummar towns, in the southern West Bank governorate of Hebron, and installed roadblocks on main roads leading to several villages and towns.

Many army vehicles invaded Beit Ummar town, north of Hebron, before the soldiers initiated violent searches of homes, including the home of Ali Ayyad Awad, who was forced along with his family in one room, while the soldiers searched the property, and its surrounding areas.

In Ethna town, west of Hebron, the soldiers invaded and searched homes, in addition to several shops.

Furthermore, the army installed roadblocks at the main entrances of Ethna and ath-Thaheriyya towns, in addition to the al-‘Arroub refugee camp, and Abda Junction south of Hebron, before stopping and searching cars, and interrogated many Palestinians while inspecting their ID cards.

In addition, the soldiers shot and injured a Palestinian man, driving his car, northeast of the central West Bank city of Ramallah, and a woman, who was walking nearby, after the driver allegedly attempted to ram them with his vehicle.