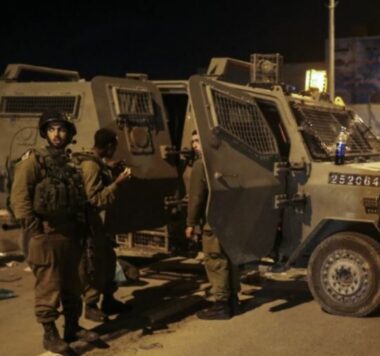 Israeli soldiers abducted, on Wednesday at dawn, five Palestinians, including a child, from Bethlehem, south of occupied Jerusalem, and two in Tulkarem, in the West Bank.

The Bethlehem office of the Palestinian Prisoners’ Society (PPS) said the soldiers invaded and searched many homes in the Saff Street and the al-Karkafa area, in the city, before abducting Abdullah Abdul-Nasser Salhab, 31, and Abdul-Rahim Faraj Salhab, 39.

Furthermore, the soldiers searched homes in the Western Neighborhood of the northern West Bank city of Tulkarem, and Deir al-Ghosoun town, north of the city, before abducting Ahmad Zidan and Ahmad Samir Abu Zeitoun.

On Tuesday evening, the soldiers invaded Barta’a town, isolated behind the Annexation Wall, south of the northern West Bank city of Jenin.

The soldiers gathered near a mosque in the al-Baidar area in the town, and launched a surveillance drone.