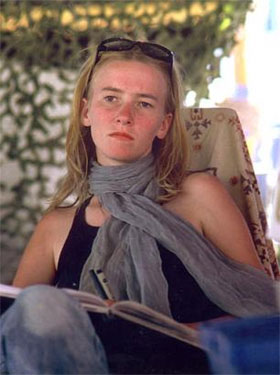 Rachel Corrie was a 23-year-old American peace activist from Olympia, Washington, who was crushed to death by an Israeli bulldozer on 16 March 2003, while undertaking nonviolent direct action to protect the home of a Palestinian family from demolition.

Since her killing, an enormous amount of solidarity activities have been carried out in her name around the world.

In an interview with the Real News Network several years ago, the late Rachel Corrie’s father Craig Corrie described the circumstances around his daughter’s death:

“She went to the Gaza Strip with a group called the International Solidarity Movement. They’re a group of people that were formed because the Palestinians have wanted and the UN had called for some human rights observers to be in that area. The U.S. vetoed that. And so some people thought, well, if they don’t have to be with the UN, it could be anybody. And so people from around the world were going there. And Rachel wasn’t in the first wave, kind of the second or third. But she went then, in January 2003.

“And she headed down to Rafah, I think partly because Gaza is one of the most forsaken places in the world, and Rafah in Gaza was one of the most forsaken. And she lived with those families. She often slept in their houses, including the house in front of which she was killed. She was standing in front of a wall as a bulldozer came at it. But she knew the family. She worked with the older boy on his English, and he tried to help her with her Arabic and stuff. So they were friends.

“But the Israelis were clearing a swath of land between the Gaza Strip and Egypt–not Israel, but Egypt. And when I say clearing, they were pushing down people’s homes. And these homes have several extended–you know, one extended family, so they might have 30 people in one of these buildings.

“But in the particular home that Rachel was standing in front of that day, there were two brothers and their five children and their wives. And these bulldozers would come up that day to the activists’ feet, pushing–these are huge bulldozers, D9 bulldozers – armored, 65-ton bulldozers. The come right up to the activists’ feet, pushing their dirt, and then they would stop. But at five o’clock, a bulldozer came up towards Rachel, and right behind her was the Nasrallah house, and it didn’t stop. It went over her and, her friends say, without picking up its blade, backed up.”

Here is the video of that event: