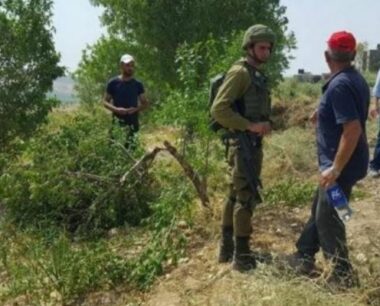 On Wednesday, a group of fanatic Israeli colonists, illegally squatting on Palestinian lands, uprooted more than 40 olive saplings in an orchard in Jaloud village, south of the northern West Bank city of Nablus.

Daghlas added that the colonists invaded Basin #6 of Sheikh Bishir area, and uprooted the saplings in an orchard owned by Rajeh Salah Hamoud, before stealing them.

It is worth mentioning that the illegal colonists have uprooted, since the beginning of this year, dozens of olive trees, and saplings, before stealing them, in Shu’ab al-Kharab area, east of Qusra village, south of Nablus.

On December 6th, 2020, Israeli soldiers uprooted more than 3000 Palestinian olive trees in Deir Ballout town, west of the central West Bank city of Salfit, in orchards that have been subject to escalating attacks by the colonialist settlers.