B’Tselem & Kerem Navot Report: “This Is Ours – And This, Too: Israel’s Settlement Policy in the West Bank”

A new report issued last week by B’Tselem and Kerem Navot, “This Is Ours – And This, Too: Israel’s Settlement Policy in the West Bank”, exposes the mechanisms Israel uses to encourage its citizens to move into the occupied territory. The report also reviews developments on the ground over the last decade, focusing on the spatial impact of the two large settlement blocs.

First, the report details the official and unofficial ways in which Israel encourages Jews to move to settlements and develop financial ventures in and around them. Among other things, the state offers settlers housing benefits, allowing lower-income families to purchase homes. These benefits are one factor contributing to the growth in the settler population, which in 2019 numbered 441,619 people (in the West Bank, not including East Jerusalem) – an increase of 42% since 2010 and of 222% since 2000. In 2019 alone, the settler population grew by 3.2% – 68% more than the overall population growth rate for Israeli citizens and residents that year, which was just 1.9%.

The two largest settlements – the ultra-orthodox cities of Modi’in Illit and Beitar Illit – have grown especially fast. By the end of 2020, they had a combined population of 140,053, comprising nearly a third of all settlers in the West Bank – an increase of 62% since 2010, when the combined population numbered 86,200, and of 435% since 2000, when they had 32,200 residents together. By offering housing solutions beyond the Green Line, the state is essentially exploiting the ultra-orthodox community’s low socioeconomic status and housing shortage to serve its own needs and further its agenda.

The state also grants benefits and incentives to Israeli industrial zones in the West Bank by offering discounted land fees and employment subsidies to factories, encouraging their steady growth. More incentives, provided by various authorities, encourage settlers to take over Palestinian farmland and pastureland. Over the last decade, settlers have established some 40 sheep and cattle farms throughout the West Bank, taking over tens of thousands of dunams [1 dunam = 1,000 square meters] where access is now completely or mostly denied to Palestinians. Most of these farms lie on “state land” and control hundreds and sometimes thousands of dunams. Most are surrounded by farmland owned by Palestinians, whom settlers prevent from entering by employing violence, sometimes severe. Some of the pastureland these settlers have taken over, and the pathways leading to them, lie within areas Israel has declared firing zones.

The impact of the two settlement blocs extends far beyond their number of residents or the size of their built-up areas. The southern bloc severs Palestinian space between Bethlehem and Hebron and separates Bethlehem from its rural backland. The central bloc commands some of the most fertile farmland in the West Bank. The two blocs also command the main longitudinal and latitudinal roads in the area, fragmenting the West Bank into separate geographical units.

Following the establishment of the two blocs, Palestinians lost access to thousands of dunams of farmland and pastureland – whether directly (in areas declared “state land” or closed by military order) or as a result of state-backed settler violence, which deters Palestinians from trying to access their land. Around the settlements of Tekoa and Nokdim, for example, Palestinians are barred access to at least 10,000 dunams. Around the settlements of Shilo and Eli and their satellite outposts, their access is barred to at least 26,500 dunams.

Israel’s policies regarding the settlements are a clear expression of the Israeli apartheid regime, which employs various methods to promote and perpetuate the supremacy of one group – Jews – over another group – Palestinians – in the entire area between the Jordan River and the Mediterranean Sea. Israel’s massive investments further entrench its hold on the West Bank, clearly demonstrating the regime’s long-term plans. These include cementing the position of millions of Palestinians as subjects denied rights and protection, who are deprived of any ability to influence their own future and are forced to live in disconnected, dwindling, economically suppressed enclaves. They are forced to look on as they are dispossessed of more and more land, while communities and infrastructure are built for Jews. Two decades into the 21st century, Israel appears more determined than ever to continue upholding and perpetuating an apartheid regime throughout the area under its control, well into the coming decades. 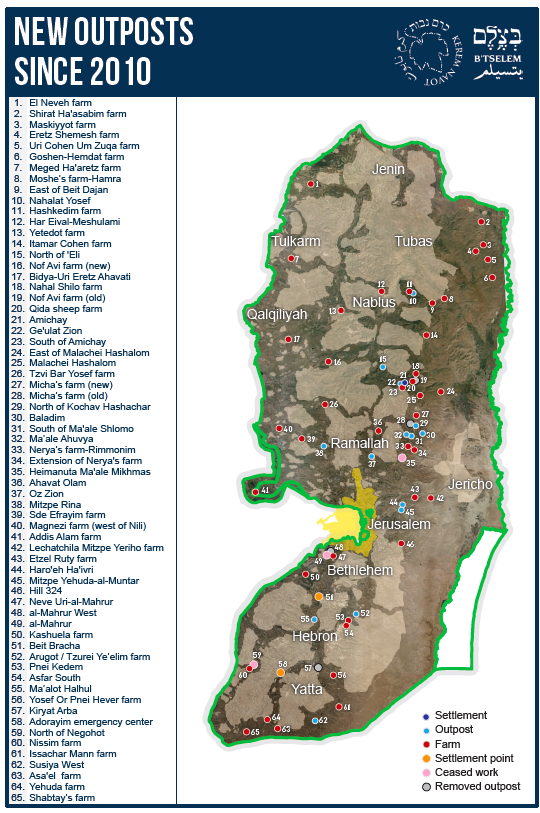