Army Abducts Five Palestinians In Hebron, One in Jenin 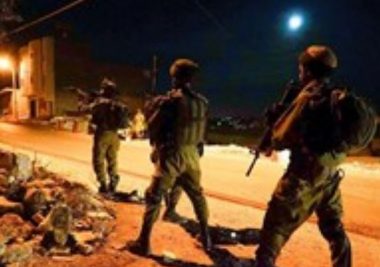 Israeli soldiers abducted, Sunday, five Palestinians, including a wounded teenage boy and two former political prisoners, from Beit Ummar town, and one in Hebron city, in the southern part of the occupied West Bank, in addition to one Palestinian near Jenin, in northern West Bank.

Many army vehicles invaded several areas in Beit Ummar, north of Hebron, including the town’s center, and the areas of the at-Tarbeeqa and the ath-Thaher, and abducted two former political prisoners, identified as ‘Ala Issa Sleibi, 25, and Mohammad Ali Awad, 24.

On Sunday afternoon, the soldiers abducted Omar Bashir Abu Ayyash, 17, and Abdul-Nasser Abu Mariya, 20, at the Etzion military base and security center, after summoning there earlier for interrogation. It is worth mentioning that Abu Ayyash was previously shot and injured by Israeli army fire, both Palestinians are from Beit Ummar.

On Sunday at night, the soldiers abducted a young man, identified as Ezzeddin Abu Rabea’, from the al-Fawwar refugee camp, southwest of Hebron, allegedly after he “attempted to attack soldiers with a sharp object, near the Ibrahimi Mosque, in Hebron city.

Also on Sunday at night, the soldiers abducted a young man, identified as Islam Sa’id Sa’abna, after stopping him at a sudden military roadblock, near ‘Arraba town, southwest of the northern West Bank city of Jenin.