Army Abducts Five Palestinians In Tulkarem, One In Qalqilia, And Two In Jerusalem 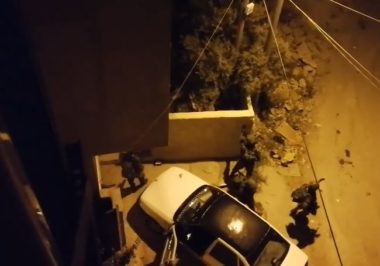 Israeli soldiers abducted, on Monday at dawn, five Palestinians from several areas of the northern West Bank governorate of Tulkarem, one in nearby Qalqilia, and two in Jerusalem, during violent invasions and searches of homes.

The Tulkarem office of the Palestinian Prisoners’ Society (PPS) has reported that the soldiers stormed and ransacked many homes in the governorate, and abducted Nasser Mahmoud Shahrour, 28, his brother Mohammad, 22, from Bal’a town east of the city, in addition to Ahmad Mohammad Omran, 27, from the al-Jarushiya village, north of Tulkarem, Ahmad Mahmoud Hishma, 17, from Shweika area, and Mohammad Adnan Tabbal, from Deir al-Ghosoun town, north of Tulkarem.

The PPS added that the soldiers broke into violently searched many homes, causing excessive damage, starting late on Sunday at night, in Bal’a town, northeast of Tulkarem, in addition to Beit Lid Athletic Club, east of Tulkarem, after smashing its doors.

In related news, the soldiers abducted three Palestinians from their homes in Hebron governorate, in the south part of the West Bank.