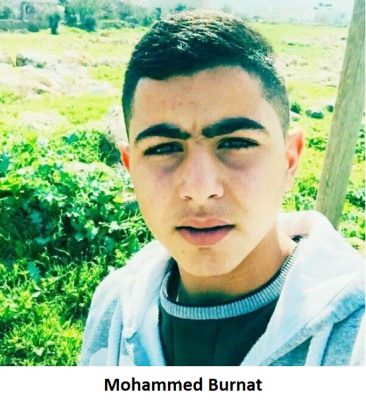 Israeli soldiers abducted, on Monday at dawn, four Palestinian children from their homes in the West Bank governorates of Ramallah and Bethlehem. On Sunday evening, the soldiers abducted a young man near Jenin.

The soldiers also stormed the home of Ibrahim Abdul-Rahim Taqatqa, and summoned his child, Mahmoud, 15, for interrogation in Etzion military base and security center, south of Bethlehem.

In addition, the soldiers invaded Bil’in village, west of the central West Bank city of Ramallah, and abducted a child, identified as Mohammed Iyad Burnat, 14.

His father, Iyad Burnat, a known nonviolent activist against the Israeli Annexation Wall and Colonies, said the soldiers invaded his home, and abducted his son.

It is worth mentioning that Iyad is currently in Istanbul – Turkey, where his other son, Majd, is hospitalized for further specialized treatment from wounds he suffered three years, after an Israeli soldier shot him in the leg, causing nerve damage.

On Sunday evening, the soldiers invaded Ya’bad town, southwest of the northern West Bank city of Jenin, abducted a young man, identified as Shoaa’ Walid Abu Bakr, and confiscated his motorcycle, after storming his home and searching it.

In addition, the soldiers invaded al-Jabriyyat neighborhood, leading to Burqin road, in Jenin, and installed a military roadblock, before stopping and searching dozens of cars.

In related news, the soldiers a young Palestinian man, identified as Mohammad Kamel Oleyyan, minutes after his release from prison.

The Palestinian, who served a prison sentence of three years and four months. is from occupied Jerusalem.