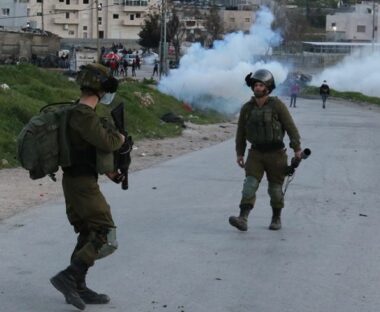 Israeli soldiers abducted, Monday, three Palestinians from Qalqilia, in northern West Bank, and one from occupied Jerusalem, instantly after his release after he was held captive for more than five years.

They added that the soldiers also searched homes in Azzoun town, east of Qalqilia, and abducted Abdul-Razeq Emad Sweidan, 17.

In occupied Jerusalem, the soldiers abducted Osama Mahmoud Rajabi, shortly after his release from the Negev detention camp after he spent five years in captivity.

In related news, the soldiers invaded, the Deheishe refugee camp, south of Bethlehem, south of Jerusalem, shot four young men with live fire, in addition to storming and searching homes, before abducting two Palestinians. The army also abducted two young men from their homes in Doha city, west of Bethlehem.

On Sunday evening, the soldiers invaded the al-‘Isawiya town, in Jerusalem, and fired many gas bombs and concussion grenades at Palestinians, who were celebrating the release of a political prisoner.

The soldiers also installed a military roadblock near the al-Arba’in Mosque, in the center of the town, before stopping and searching dozens of residents and cars, in addition to closing a main road.