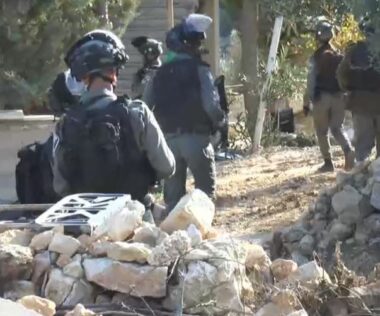 Israeli soldiers demolished, Monday, two rooms, built on private Palestinian lands in the al-Minya village, southeast of the West Bank city of Bethlehem. The army also ordered the removal of tents in the Northern Plains.

He added that the army demolished the two rooms under the pretext of being built without a permit from the so-called “Civil Administration Office,” the administrative branch of Israel’s illegal occupation of the West Bank.

The soldiers have recently escalated their violations and invasions in the village, including the searching and ransacking property, in addition to destroying structures, handing demolition orders and confiscating property.

In related news, the soldiers invaded Hammamat al-Maleh area, in the West Bank’s Northern Plains, and ordered the residents to remove tents that were installed by the “Wall and Colonization Resistance Commission,” to provide vital services to the residents, subject to frequent invasions, demolitions and displacement.

Furthermore, the soldiers abducted three Palestinians from Qalqilia, in northern West Bank, and one from occupied Jerusalem, instantly after his release after he was held captive for more than five years.

On Sunday evening, the soldiers invaded the al-‘Isawiya town, in Jerusalem, and fired many gas bombs and concussion grenades at Palestinians, who were celebrating the release of a political prisoner.

The soldiers installed a military roadblock near the al-Arba’in Mosque, in the center of the town, before stopping and searching dozens of residents and cars, in addition to closing a main road.