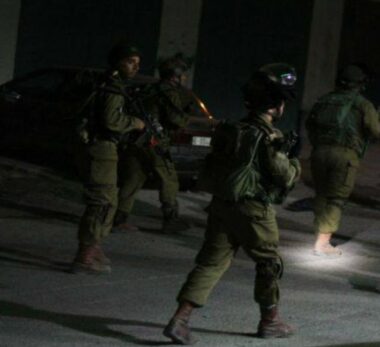 Israeli soldiers invaded and ransacked, on Thursday at dawn, many homes, and abducted fourteen Palestinians, including siblings, in addition to shooting two, in several parts of the occupied West Bank.

In Nablus, in northern West Bank, the soldiers searched homes in Burqa village, northwest of the city, before abducting two Palestinians, identified as Haitham, 23, and his brother Ahmad Yousef Abu al-Leil, 30.

In Tulkarem, in northern West Bank, the soldiers abducted Mahmoud Motea’ Salit while crossing the Ennab military roadblock, east of the city.

The soldiers also isolated Burqa village, north of Jenin, after placing sandhills at its entrance, preventing the Palestinians from entering or leaving it. In addition, the soldiers invaded the Deheishe refugee camp, south of Bethlehem in the West Bank, and abducted two young men, identified as Mohammad Elias Shahin and Emad Hussein Shahin, from their homes, and took them to the nearby Etzion military base.

The invasion led to protests before Israeli sharpshooters occupied the rooftop of Ebda’ Cultural Center and shot a young man with live rounds in both of his legs.