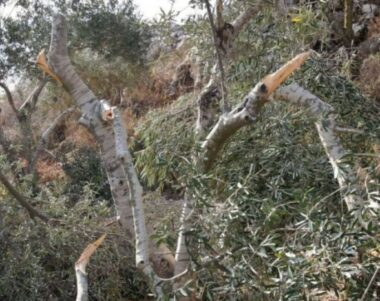 Fuad al-Amour, the coordinator of the Protection and Steadfastness Committees in Southern Hebron, said the colonizers cut more than sixty olive trees, east of Yatta town, south of Hebron.

Local farmer Ahmad Hamada owns the orchard, and the trees were planted four years ago on 1.5 Dunams of his land.

Al-Amour stated that the colonizers came from the illegal Avigayil outpost, which was built on stolen Palestinian lands, east of Yatta town, south of Hebron city, in the year 2001.

He added that the colonizers invaded the area more than three times in the last three years and uprooted many trees to force the Palestinians out and expand their illegal colony.

In addition, the colonizers invaded Palestinian orchards in the Taybeh area in Tarqoumia town, northwest of Hebron, and cut three hundred olive saplings owned by Ata and his brother Aziz Ja’afra.

This marks the third attack against the orchard; previous violations include spraying the trees with toxins, in addition to uprooting trees and saplings.

Two days ago, the colonizers cut more than fifty olive trees and saplings in the Khallet Salama area in Tarqoumia town, to prepare for a new segregated road on the stolen Palestinian lands.

Article 49 of the Fourth Geneva Convention states: “The Occupying Power shall not deport or transfer parts of its civilian population into the territory it occupies.” It also prohibits the “individual or mass forcible transfers, as well as deportations of protected persons from occupied territory”.